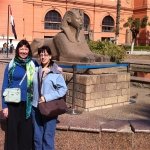 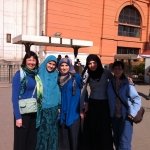 These pics are Kanina and me and, some sweet gals who wanted to be photographed with us and us with them. So, our cab driver who stayed with us in the museum took the pics for us. The gals are in university in Egypt.

So… I just came in from yet another day full of experiences so memorable that they made me weep. I swear I am not making this up.  Perhaps tomorrow will stink. But, so far, each day here just fills me with amazement, gratitude and amazement.

Below, in brief – really brief due to time constraints are highlights of what happened:

Met new dance friend, Fatima from Belgium. Fatima, much like me, has her own teaching and store. Much admiration.

The Cab Ride Kaleidoscope was wonderful in the light of day:

A pair of 10 year of boys driving a donkey in front of their Donkey cart pulling what looked like a giant bag of plastic 5 feet high out among the traffic whizzing cars.

A seemingly vandalized or crushed BMW totally totaled with wheels collapsed in off their axles but with a cover to protect it from dust.

kids and adults walking in traffic that Americans would only attempt if on an illegal substance.

People walking with their stuff on their heads, of course, groceries, laundry, cats (kidding).

Urban Cairo for the first time – looks like NYC with a bunch of plate glass store fronts with western clothes and other kinds of shops. We passed several shoe shops with floor to ceiling crazy shoes displayed. We were told that when you are all covered up as a woman, the footwear is a place to express yourself. We went to a travel agent in the block with all the travel agents.

Tahrir Square -just two days before the January 25th anniversary of an unprecidented peaceful overthrow of  Mubarick after 30 years reign of misery. It was really odd to be driving through the area where the revolution and demonstrations have been. Set back from the road, all we saw for proof was a banner that had a “25” on it and a fist. And some people gathered. But overall, we were amazed at how peaceful it was and not destroyed. People were out strolling through traffic on a sunny day. Just cars driving and people walking by/through. We almost did not come to Egypt bc of this sunny place (about 45 min drive from our hotel, by the way).  We’ll see what the 25th brings. I am actually very, very happy to be here at this historic time. Hope it stays that way.

The Cairo Museum. Sigh. There are no words.   I am not a big museum. I can only take in so much. But, this was like visiting a church or something sacred. The lives of people who lived thousands of years ago are still rippling on to us and represented in their “things”. My eyes started leaking in the opening room as we touched and studied the burial chambers, writings in hieroglyph, and the statues for clues into who these people were. I recall that a few were scribes but many of the huge, rock carved boxes had no inscription for us to read. So, we don’t know who went to rest in those boxes.

As we went deeper into the next room, we saw more artwork and statues than burial tombs. Paintings, for example – can you imagine your painting still “speaking to people “after 4000 years? Very moving to me. There were some seriously skilled jewelers that lived, people, and their stuff is still here. Tiny beads for very ornate jewelry. Teeny animal carvings that are really detailed. Religious artifacts, of course, many little carvings of their deities and for their in home shrines, or whatever. Their furniture that remains, again, is someone’s artisanship. We saw three beds that have frames made out of cat profiles. Hard to explain but, it took vision, concept, and skill to make furniture.

The people who’s stuff and burial items we were looking at,  seemed like they were still here in a way. And, that they were geniuses b/c how can I be looking at King Tut’s thousands of year old underwear but my underwear  from last summer has holes in them?  And, there were some sandals in the King Tut area that I swear I’ve seen on Newbury Street in Boston. Inlaid stones and beads and glint gold placed perfectly on the thong sandal. I mean, Exquisite work. We have not really invented anything better when it comes to some of these items. They had it right a loooooong time ago. NOt sure what I’m getting at exactly. I have to read more about these folks and figure out what the heck happened to them.

And, PS,  at King Tutenkhamen’s collection, you can see the underwear AND the socks he wore!  They look quite comfortable in a  cotton (Egyptian Cotton, I presume). You can see the stitches in the seamstress’ work, the woven fabrics.

The last thing we saw was my goal… the room with Tut’s golden mask which they placed over his mummy head -which, his mummy was inside a few nesting gold carcoghogi, each more stunning than the one before it.  We saw a lot of stunning gold today to say the least.

I have a lot of reading to do to learn more about this really amazing civilization. Some questions I have are about the kings and queens and the husband/wife relationships in general in the culture. Several statues feature a loving gesture. The queen’s hand is being held by the king. Or, the Queen is touching the shoulder of the king. Was it real affection like w know? Or are the affectionate gestures just to indicate that marriage relationships? Was Tut a good king? Were the rest of the people broke bc he was so rich? And, do some people I am meeting here in Egypt descend from these lines?

And, wow, I could have been dead due to stupidity or self loathing I faced in the 90’s. I would have missed all this. And, Kanina rocks and I get to be alive and share this with her and anyone who wants to know. Really!?! I left that museum saying, if my cab crashed and time was up, it’s ok bc I felt so grateful to have seen so much and enjoyed it so much.

In the cab back to the hotel, we bought T-shirts that say “25” on them to commemorate the revolution. We bought them out our cab window from a  guy on the curb as we drove.

That was the amazing day I had From Ancient Civ to Tahrir’s current revolution. The night I had is a totally separate and amazing story.

Thank you to those who are reading along. I wish you were all here. Get here if ever you can. The people are really nice and they lost 20,000 jobs due to the media’s replaying of the Tahrir bad stuff. NO tourists are here. They are so appreciative to see anyone.

love to all, Aurel