Apparently, every single day here something surprising and awesome happens.

As with last night’s surprising live music encounter, day #2 kept it’s surprise until dinnertime.  Unaware of the good fortune about to befall us, Kanina and I sat to eat at the hotel only to hear the waiter mention a wedding zeffe was starting in the lobby. My heart jumped and my body followed.

We left our table heading for the lobby in hopes of catching a moment of the proceedings. There, a band getting the party started played to the couple. Then, the delightfully happy family began dancing in a small circle, hands in the air in front of the stunning bride and groom, while several drums, a mizmar, and a trumpet played, and guys were singing.  After they got the folks excited, they moved the procession up the stairs to the ballroom while playing. I felt like I was peeking in on an ancient tradition bc these instruments predate amplification -as do these traditions, of course. All really old stuff unlike American traditions of dancing to the Chicken Dance at weddings :)

VERY IMPORTANT NOTE: One of my musical hopes in Egypt was to hear a real live mizmar. I’ve only heard them on recordings. Designed to be loud, possibly in Turkey and known first as the Zorna or Zurna (email Cynthia Ricciardi who wrote the history of each instrument for a Helping Hips installment), I used to hate the sound. Then it became my friend bc it cued me to use folkloric movement when I heard it. This instrument goes with several folkloric dances. When improvising dance, you appreciate sounds and rhythms that have significance and give you information on what/ how to dance properly.

So, there I was,  scurrying around the outskirts of the party thrilled to see this ancient tradition and hear my friend whom I’d never met, the Mizmar. As I gawked, smiled, and fought back tears I was a little scared of being annoying to the family and friends but I was so excited. I got so into the moment that I had to force myself to take pics.  I am posting a video on FB as this post uploads. 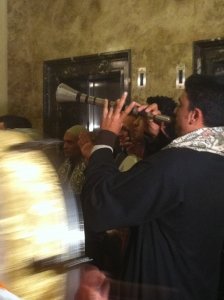 I’ve danced a few wedding Zeffe’s myself now in Mass and it’s the biggest honor of all the wonderful dance moments I enjoy.  But I’ve never had a multiple drummer band leading the parade like this evening’s couple had. And, seeing this in Egypt where it all began really helps me capture the feeling and the tradition in my heart. I know that the next wedding I dance will be extra special.  Tonight, we did not see a belly dancer but who knows what happened upstairs? 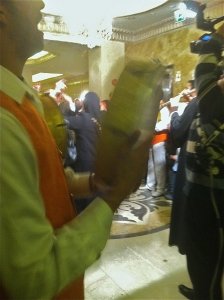 So, “day two” was supposed to be a simple day of rest and even that turned out to have a perfectly exciting bunch of surprises in it.

If the mizmar, zeffe, and lovely bride, groom and family were not enough, we met a fabulous dancer whom I’ve seen on the web. Raksanna from Chicago is a 5 time teacher at Ahlan Wa Sahlan Festival in Egypt with many performance credits. In spite of the prestige and skill she obviously has in this art form, she was incredibly warm, down to earth, and generous with her knowledge of Egypt. I promised not to tell about it but Raksanna is currently involved in a very cool production. Friend her on Facebook and ask her.  Or visit http://www.raksanna.com

Raksanna at Competition at Randa’s Weeklong this week. She did great.

Sleep, though,…. not so much sleep here in Egypt. I am totally upside down. My room has no window either -it’s blacked out, so after a complete deep state of rest took me over yesterday, I was in a cave and slept until 2or 3PM?

So, I better hit the feathers as my mother says. Tomorrow, we go to the Cairo Museum. They Pyramids were built a few thousand years before Christ so there is a lot of history to cover. I’m sure I will learn a lot. And, I aim to see the Golden mask of King Tut and other antiquities from this ancient culture.

Yes, this museum is by Tahrir Square where demonstrations are held but we will stop and turn around if any danger presents itself. Our driver is the same who protected us amazingly in the Khan Kahlili market the other night, Tamer. I hope that Karem also comes, our English speaking guide. We’ll see. THEN……. Tomorrow night…….we see Randa Kamel dance….. on the Nile Maxim Cruise…..