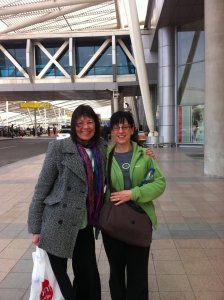 We made it to Cairo!

Clear skies as we flew in over the Nile river. I was way too amazed by the sandy sites to take a pic. Of course when I looked away to fill out the paperwork needed  Kanina saw the pyramids from the plane!

My fear of flying is so unfounded. I almost died 12 times on the highway from the airport to the hotel in Cairo. At break-neck speeds and 4 lanes of highway on each side, the population drives bumper to bumper and speeds up to each other with abandon.  They do not use the lines on the road at all. Folks will drive ON the line between two of the lanes that have cars in them. Nor do they use turn signals as they slide in and out of spaces that they do not seem to fit into. Beeping seems to have replaced the use of breaks? All this while pedestrians try to run across the 4 lanes of highway! The first guy I saw in the highway between lanes waving his arms seemed to be a loon committing suicide. But, no, that’s how you get to the other side of the highway to your job. We saw several people waving and yelling in the highway. INSANE. Saw an accident of course. Just to set the nervous gut into full swing. It was like a highway full of New York City cab drivers. Flying is nothing now. Thanks Edward who picked us up and our driver.