Sara Farouk, played cruise emcee welcoming all of us and then announcing that a very special guest would be joining us. We had no idea who this could be. Sara went on to describe that this guest is the ” woman who started it all”, stating that we owed “it all” to her. This was “the person who first began working with women in groups and teaching Egyptian dance”, Sara said.

My mind was reeling and searching it’s belly dance history to figure out who this person was. Then, open swung the glass doors at the far end of the ship as Sara shouted her name and in came a huge ICON in Egypt and in the belly dance world internationally,  Nagua Fouad. The place went wild with cheers and everyone stood to their feet. The band started to play a traveling song for her and she was walked to her table as sea of smart phones and cameras were working overtime to capture her  – including mine. 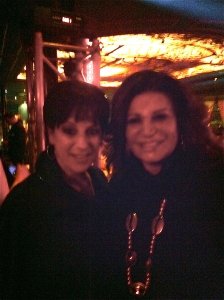 Nagua Fouad and me.

Nagua Fouad is legend, legend, legend. She is the only remaining dancing film star who came from the 50’s. She took the dance and made little theatrical dramatic vignette’s with it. She is over 70 years old now but even walking in you could tell she was royalty with her big, show girl style.

After our highly esteemed guest, Nagua Fouad, was seated, a grand whirling dervish dancer in a brightly colored skirt, top and cap was presented. This man spun for about 20 minutes in brightly colored skirts, top and cap.  He did my favorite Dervish “Trick” which is to spin while taking one of the top skirts off, lifting it over the head, then, while still spinning, folding it into a baby shape and holding it.  He had his own modern day twist on the costume, too,  which make his skirts and hat light up so he looked like one of those 4th of july kids toys. It was exciting. 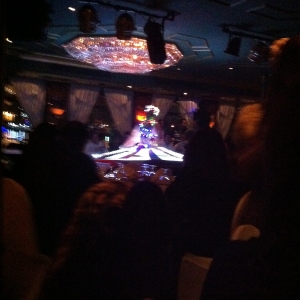 If you’ve never seen Dervish Whirling before, it looks like one skirt but the showy presentations have 2 skirts layered so that one can be moved over head and so on. I’ve never seen a skirt light up like this did at the end of his dance.

Finally, after all that excitement, Sara brought on the star, Randa Kamel. In purple full and flawy with rhinestones  a plenty including a rhinestone shin treatment (not sure what to call it).   Much like one of my other all time favorites, Phaedra from Boston, Randa hit the floor on fire. I’d only seen her on video and I was very curious to see what her show would would be. There she was in three D just as powerful, fresh, and full of joy as I expected. Her opening show was full of shimmies and  her signature pointing and singing along including one with Egyptian Singer, Hoda, and a Shaabi number, I think. Hard to recall it all bc the woman did so much in this evening. 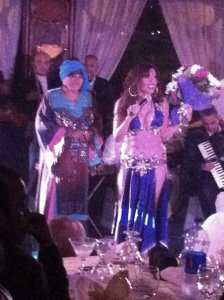 After taking the place by storm and leaving to long lasting applause, we noticed that the band was playing something soft and droning. A tension filled the air as if clearly something or someone else was coming.

Within minutes of leaving in purple classical Oriental costume, it was Randa who returned in a folkloric inspired dress made of black fishnet with pink paillet bra and belt, pink head cover with paillettes and the traditional prop for this dress, the cane, was covered in sequins. Folkloric style ( stick,cane, earth, tending and protecting the animals) is lovely but what made her appearance extra fun was a totally adorable guest donkey (fake with someone inside it). Randa danced down the back aisle this time, bringing the camel through the guests to Nagua Fuad’s table and having fun.  Once on stage, she showed a super sassy dance, of course. And, she did a few more numbers, too, in that costume. So desert gal sweet. 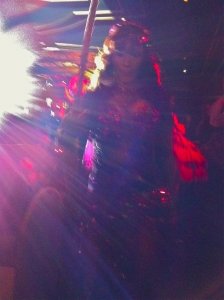 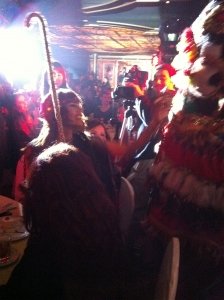 Randa tends her Donkey in the crowd.

Next, we had a fashion show of one of the costume designers vending at the event. Very fun.

And, to my surprise, Randa came back again! This time in a a really cute pant suit. NO stopping this woman at all. 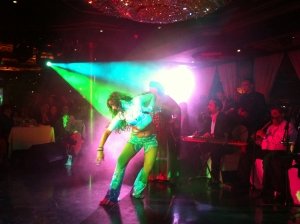 The big surprise in this set was that she brought up Nagua Fouad to the delight of the crowd.  We were all on the edge of our seats and at the same time stunned by seeing Nagua dancing live before us.

Nagua’s  flare for drama which I’ve only seen on film was totally “on”. At one point, she got us clapping and motioned to the band to cut out. She shimmied to the sound of our own clapping. While she stood there making us make her dance, she made jokes by looking for her watch as if to say “can I go now”? And, the crowd ate her up. We each hope that when we are over 70 we too have fun loving moves and spirit to show the world.  Then, Randa gave her a gift on stage. People were very moved by the love between them.  Randa went away again. 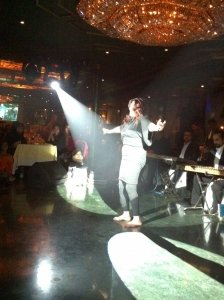 Next up was Randa’s sister who sang. And, then, Randa returned AGAIN with exactly the same energy she began the show with – high energy. She wore a hip hop cam0 look: a brown sequin base ball hat and matching vest over bra and pants with cut outs.

Then, she went away again and then came back AGAIN in a blue dress with pink bra and sash on the hip. Then she brought dancers up from the crowd to dance with the band and we all cheered.

Next up, some folkloric singers came out and sang our favorite songs with the band -which, by the way, was about 19 guys strong. The folk singers invited all of us and we did join them on the floor to dance.  Randa came back in street clothes to hand with us.

Needless to say, I think I saw two legends in one night. Nagua and Randa. I have no idea what time that night began or when it all ended and typically the Nile would have been part of the evening, too, but after the dock party with the drummers, I could have been in a Walmart for all I know. I was just taking it all into my iPhone and my brain. I saw every person on that ship lose track of their financial worries, their sick loved ones, and the fact that they hate their boss. The group was in love with Randa bc she was expressing joy, music, emotion and beauty. That is the ultimate gift the artist can give us. I am inspired. I was also thinking that I should state to anyone who asks that if you ever want to take a workshop in Egypt, the Randa Kamel, Of Course, is worth every penny just for the opening party.

xo to those who have helped me to see this amazing country and study dance here. The partys ain’t bad either.