We were told only that we were going on an outing. “Bring layers as it may get cold when that sun goes down”. It gets cold very fast here by the way.

Turns out we were going to El Ezba Resort, a Classic Hollywood Themed event location. Antique cars from 1940s are parked on the grounds, pics of all the classic Egyptian black and white movies on the pavilion walls, many black and white posters of dignitaries, palm trees, live musicians roaming, large posters of Fez-wearing guys on the buildings, and an oasis-like pool. All lovely like a vacation. We drove through poverty to get here but it was very peaceful in here it was also the warmest, sunny day we’d had since arrival

****Again, the organizors of The Randa Kamel Of Course Festival have it going on. They knew we’d been working so hard in classes and trying to see dance at night and me trying to do upgrade Alimah’s (stock-shopping-Egypt-research) and so on.  It was such a needed day of rejuvenating sun and education NOT in the classroom.

As we unloaded our bus we heard live music including a rebaba – also called spike fiddle which I’ve never seen one played live! This instrument makes lovely low notes. A hand drum was also played and a ney flute. Ney is the flute that is played sort of crookedly. 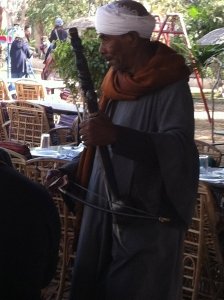 Dancing to the  music was, of course, a dancing horse. When we do Saidi dance (folkloric dance with cane), we do some kicking pony-like footwork that this horse was doing. Is this the  finely trained Arabian horse we imitate? No. Perhaps, a cousin or a close friend to the fine Arabian. But, his front feet were picking up one at a time on the beat (almost) and then, sometimes he’d step double time. His trainer did have a little switch which I was sad to see. But, I think we just saw a really old tradition. 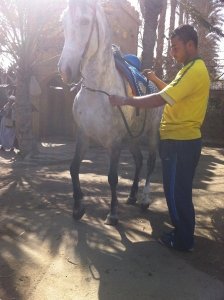 Much later that day, I observed her and noted that the little girl had behavior far beyond her years. She went from sweet to bossy if she did not get her baksheesh – tip. And, once I saw her trying to tie her hair back and she had the goat’s head between her legs to keep it from running off. She could probably man handle a full grown cow if she had to. Stealing her home to us could have bad results, I imagined. I might awaken to the sound of her chopping up the piano for firewood.
As we entered the gate, a round woman was sitting on the ground baking bread in a brick fire oven. She had a big basket of bread on her head – hot out of the oven. She began the highest pitched Zaghareet I’d ever heard. I motioned to her to hear it again and you could see her grossly fat tongue in a knot like a golf ball trilling from side to side. Then the yell at the end sounded computer generated – that high. I was amazed really. video is on my Facebook wall.
As we followed the pathway, the sounds of yet another wandering band drifted toward us. We found three guys in Fez hats oud, violin, doumbek, a pavilllion with a DJ waiting, and a dance floor with several round tables facing it. We figured we were in for some sort of entertainment. 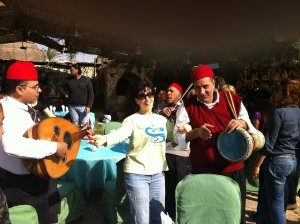 While we milled around the pavilion waiting for guidance we found camel rides, free henna, Donkeys to pet and lovely locations to take pics. We began to socialize with the people we’d been sweating beside and enjoy the moment. I was so, so, so charmed by Ramses the Camel that I had to go over and talk to him. Ramses wore a fabulous camel blanket with colored pompoms and tassels. I was reminded of my long time ago friend Mary who married a Labanese man. Her husband was horrified that she adored the camel blankets and would wear them for dance. They are very colorful and fun.
So, Kanina rode first like a pro. She looked fabulous in the white turban. I was so proud of her.  I was afraid of the getting up. I heard you can fall forward when they put their back feet on the ground first. But, if Kanina did it, I could. I held onto the saddle horn tightly and up we went without any issues.

I hope you can click on this and see me in a video on the camel: Ramses I just loved the slow lope of Ramses and imagined traveling across the desert. Camel riding is so much more comfortable than horse. Kanina and I both rode on our own and then together for a longer ride which was a blast. At one point we got off and fed Ramses some grass and weeds. His nose was so soft. I just adored that camel. I massaged his head and thanked him for the ride. He was 6 years old. Thank you, Ramses!

PS we got bilked by 20 pounds each plus tipping on that. Long story but I have no regrets.

Before I knew it the DJ was playing all sorts of music. Our folklore teacher lead us in some Debke line dance. Then some rap from good old usa come on. Bollywood stuff was playing. It was really fun and we got wild out there. I am quite shy around dance floors but when I let go I really have fun.

Then, the folklore show began. I can’t recall the name of the group at this moment but they were quite something in brightly colored costumes. First in orange and yellow robes. Next the ladies had black dresses with scarves on each hip. I wonder if that was Tunisian? I have to find out more.  They did several fabulous dances including one that we learned the other morning in class. Where the man and woman get together and use the scarf to dance. Very sweet.

Then, lunch under the other pavilion. It was amazing. I’ve been eating very little veggies here bc they don’t have much that is cooked (avoiding bacteria). Well, this buffet was like vegetable paradise. Plus, they had stuffed grapeleaves, stuffed cabbage, rice, a veggie stew. Then, after we sat, the staff put these gorgeous brass boxes filled with coals on our tables that had kbobs on the top foil covered grill. It felt like an antique method of keeping food warm. It doesn’t take much to thrill me. I was thrilled with this box. I really want one. 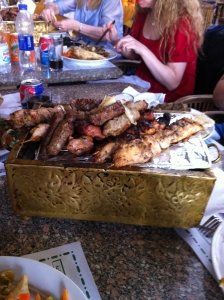 We ate with the Scottish gals and due to my Scottish roots and their sweet nature, I just love those gals! Raksanna and Fatima joined us, too. Before long the band from outside the gate came in and table side partying ensued. They would sing your name if you’d give them money so we danced and shook money at them over head- another tradition tolearn about. 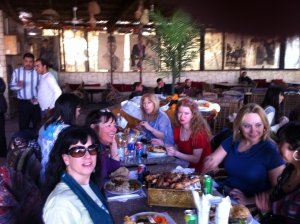 The Scottish Table lets us in :) 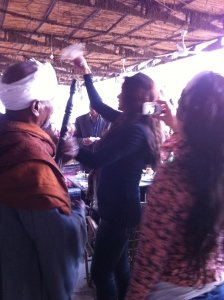 shaking money so the band will sing for you

Sweets included baklava and fresh oranges from the farm right there. Kanina had Turkish coffee which she gave me a taste of out of her tiny cup. Reminded me of what happens when you leave the coffee on for too long but I found the long handled pot that the coffee is in to be yet another old exotic tradition that I wanted to sample.

After lunch, we had a group photo and then went back to Pavillion #1 for the rest of the folklore show.

The Tanoura was truly memorable. Mind you, I hoped to see one here and Egypt and now, I was seeing my second. The first was the male dancer on the Nile Cruise Maxim Ship. Awesome. This one was a female and, I have to say, she surpassed the gentleman.

In addition to the usual “tricks”, she sang her song which was a prayer and gestured it with lovely hand motions and poses. When she held her hands like a mirror and looked up into them as if for guidance the image was so lovely it made me cry (I know, again with the crying?!) She herself bounced as if crying while turning, she did amazing head swings while turning, she used two flowing black scarves, she balanced the discs on her head while spinning, she bent at the waist and back up on the beat. 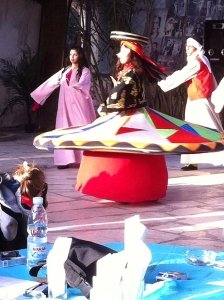 The whole spinning dance went on for at least 15 minutes. When she was done, she stopped on a dime, looked out at us, bowed and ran off without a hint of dizziness. Then, some dancing men did the crowd Tanourra over our heads and invited a few dancers to try the skirt and spinning on the dance floor.

After that, there was stick dance. Also, a really cute and funny dance about 2 Arab men fighting which after being her for less than a week now, I have a totally different perspective on.  It was performed by one man in a 2 man suit. My camera battery died and it’s hard to describe but suffice it to say it was funny and refreshing that they would poke fun at themselves.

I took a nap on the bus ride home but opened my eyes in time to see in the distance my first glimpse of the pyramids. Wow. not in  a picture but in real life. I cat want to see them.

Now, I am home in my room. It’s a lot of stimulation every single day here and then bam, alone. that part is wearing on me. I should wash my clothes out in woolite and hang them, work on my dance, and finish this blog entry in reverse order. I miss my family a lot. As much fun as it is an how enriching it is, the socializing can be hard on my inner shy gal. And, even if I’m having a blast, I am aware that I am a long way from home – especially tonight. We are not supposed to leave the hotel this evening due to the revolution anniversary. Tahrir square was full of people I read on CNN and they don’t want us out in any harm’s way.